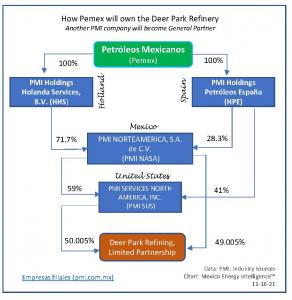 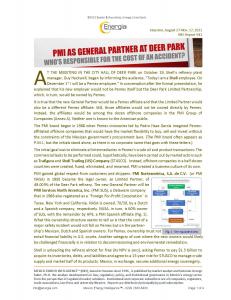 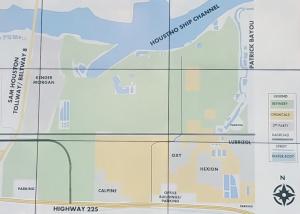 The evident goal of this ownership structure is to safeguard Pemex against the risk of claims litigation in U.S. courts”
— George Baker

HOUSTON, TX, UNITED STATES, November 19, 2021 /EINPresswire.com/ — A new report by Pemex-watcher George Baker shows how the state-owned company will avoid financial liability for any future safety or environmental incident at the 340,000 barrel/day refinery located in the City of Deer Park, 20 miles east of downtown Houston. The report, “PMI as General Partner at Deer Park,” asks, who’s responsible for the cost of an accident? An ownership chart shows that Pemex, a government agency that operates as a hybrid commercial enterprise, will be twice-removed from the ownership of the refinery.

Shell is planning for a December 1st hand-over to Pemex of its operational control of the refinery. Pending is regulatory approval by the Committee on Foreign Investment in the United States (CFIUS), which is chaired by Treasury Secretary Janet Yellen. Shell expects approval by November 29.

At the City Hall session in Deer Park on October 19, the refinery plant manager, Guy Hackwell, an Australian with a Shell 30-year career, began by informing the audience, “Today, I am a Shell employee. On December 1st, I will be a Pemex employee.” In conversation later, he explained that his new employer would not be Pemex itself but the Deer Park Limited Partnership.

Neither the Limited Partner nor the future General Partner is known to the American or Mexican public. “The details get messy,” says Baker, “but getting them straight is worth the trouble.”

The new General Partner (a role currently exercised by Shell Oil Company) would be one of Pemex’s dozen offshore entities in the “PMI Group of Companies.” The future General Partner will be P.M.I. Services North America, Inc. (aka, PMI SUS), a company registered in Delaware in 1988. This company, in turn, is 60% owned by P.M.I Norteamérica, S.A. de C.V. (aka PMI NASA), a Mexican company. The other 40% of PMI SUS is owned by an affiliate in Spain, PMI Holdings Petróleos España (aka, HPE).

“The evident goal of this ownership structure is to safeguard Pemex against the risk of claims litigation in U.S. courts,” says Baker, who is the founding publisher of Mexico Energy Intelligence, an industry newsletter.

There are awkward parts of this arrangement for the American and greater Houston public. First, Pemex made no institutional preparation to assume the role of operator of the refinery. Pemex lacks refinery executives who are bilingual and familiar—as is Shell—with American regulatory idiosyncrasies relating to health, safety and the environment (HSE).

Second, taxpayers are asked to assume the risk that the PMI legal owners would not be able to meet the costs of a major safety or environmental incident or eventual decommissioning and environmental remediation. Third, a foreign sovereign would have the power of appointment and dismissal in a major industrial complex.

The awkward parts for Mexico are the lack of due diligence, price, and risk exposure: The decision to acquire Shell’s controlling interest was taken by persons in a small circle around the President of Mexico. There was no public discussion or prior budgetary allocation. Not even the Secretary of Energy and the planning department of Pemex’s refining division were included in the decision and negotiations.

For its part, Shell is unloading the refinery almost for free (as the NPV of the refinery is zero), a step consistent with the company’s strategy to shrink its equity and emissions in the refining sector.

Pemex pays $1.5 billion ($500 million borrowed) mainly to acquire Shell’s share of inventory, debts, and liabilities. Shell would continue to have a role in the refinery with a 15-year agreement to manage its crude supply and market half of its products. Mexico, in exchange, secures additional energy sovereignty, an intangible benefit.

Critics in Mexico have asked, why would Pemex, with US$110 billion in debt, want to acquire a 92-year-old US refinery that had been losing money during the previous three years? Further, Pemex learned little from its 27-year partnership, during which time Shell guarded its trade secrets, even from its partner.

The PMI brand was launched in 1988 when Pemex visionaries imagined Pemex-affiliated offshore companies that would have the market flexibility to buy, sell and invest without the constraints of the Mexican government’s procurement laws. (The PMI brand often appears as P.M.I., but the initials stand alone, as there is no corporate name that goes with these letters.)

The initial (ideological) goal was to eliminate intermediaries in Pemex’s crude oil and product transactions: The commercial tasks could have been carried out by market actors like Trafigura and Shell Trading (US) Company (STUSCO). Instead, offshore companies in a half-dozen countries were created, fused, eliminated, and renamed. PMI created a business culture of its own and expanded beyond its original commercial charter.

PMI gained global respect from customers and shippers; for example, PMI would promptly pay demurrage charges owed by Pemex to maintain strong relations with suppliers (and waiting as long as a year to be reimbursed by Pemex).

PMI NASA in 1993 became the legal owner, as Limited Partner, of the 49.005% of the equity in the Deer Park refinery. As the refinery was operated by Shell, its existence was ignored in the business plans of Pemex’s refinery division.

The cost of a major safety incident would not fall on Pemex but on the partnership’s Mexican, Dutch and Spanish owners. For Pemex, ownership must not entail HSE liability in U.S. courts.

Another category where the new owners would likely be challenged financially concerns decommissioning and environmental remediation. (A Shell engineer guessed that $1 billion might be needed to decommission the refinery.) Where private parties default, taxpayers step in.

Shell assures the public that things will continue “as before,” but skeptics point to the adage of Texas farmers, “The best fertilizer is the footprint of the owner.” Replying to the question, “How will the footprints of the new owner be seen in Deer Park?” a former PMI executive wryly observed that “Pemex wears heavy boots.”