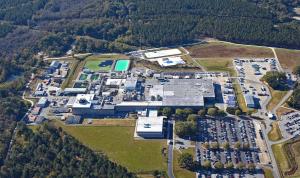 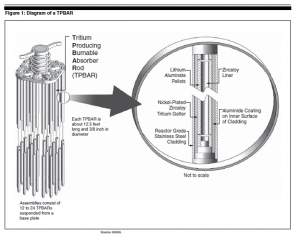 Tritium Producing Burnable Absorber Rods (TPBARs) are assembled at the Westinghouse facility and irradiated in TVA’s Watts Bar nuclear reactors to produce tritium gas used in all US nuclear weapons, to boost their explosive power

COLUMBIA, SOUTH CAROLINA, USA, November 19, 2021 /EINPresswire.com/ — A commercial facility near Columbia, South Carolina that produces uranium fuel for nuclear power plants is also involved in secretive activities key to U.S. nuclear weapons, according to a report released today. The "dual-use" nature of the facility violates international nuclear proliferation norms that claims to keep separate the commercial and military nuclear activities, according to the report.

The report provides previously unknown information about the nuclear-weapons-related activities at the commercial facility and indicates that waste streams from the activities are unknown. The public has been kept in the dark about the secretive operations and has never had an opportunity to comment about waste production or any other aspect of the nuclear-weapons-related operations.

The report entitled "Crossing the Line: South Carolina Nuclear Weapons Secrets Exposed," released by the public interest group Savannah River Site Watch, based in Columbia, SC, gives an account of how the little-known Westinghouse commercial facility is actually a “dual-use facility” that fabricates special assemblies used to produce radioactive tritium gas. Tritium is a non-fissile nuclear weapons material supplied by the U.S. Department of Energy to the Department of Defense for use in all U.S. nuclear weapons to boost their explosive power.

The Westinghouse Columbia Fuel Fabrication Facility, which is regulated by the U.S. Nuclear Regulatory Commission, is a key U.S. commercial facility providing nuclear reactor fuel, made from low-enriched uranium, to both foreign and domestic nuclear power reactors.

Tucked away at the Westinghouse site located upstream from the Congaree National Park, an unidentified area of the facility is used to assemble specialized rods transported to commercial nuclear reactors in Tennessee to be irradiated to produce tritium gas. That gas is extracted at DOE’s Savannah River Site near Aiken, South Carolina and packaged into small reservoirs that are then supplied to DOD to be inserted into all U.S. nuclear weapons.

“The public has a full right to know details about production of the tritium rods at the Westinghouse facility, including how those activities are connected to U.S. nuclear weapons, the amounts hazardous waste streams produced and how they are managed,” said Tom Clements, director of SRS Watch. “The fact that we have a dual-use military-commercial facility right in our midst that few know about will come as a surprise to many. Given the shroud of secrecy, information about the facility, its regulation and the waste it produces have been omitted from a current environmental review of operations by Westinghouse, which is unacceptable,” added Clements.

A secret area at the Westinghouse Electric Corporation facility assembles what are called Tritium Producing Burnable Absorber Rods (TPBARs), which contain no nuclear components. The lithium in the rods is converted to tritium gas during irradiation in the commercial Watts Bar reactors, owned by the Tennessee Valley Authority (TVA).

Production of the tritium rods has taken place for around 20 years at the Westinghouse facility but only now has important new information about the process been obtained. As the Westinghouse facility is now undergoing a formal environmental review of its application to extend its operating license for an additional 40 years, the scrutiny about the weapons-related activities and waste it produces has increased. In preparation of the heavily footnoted report, SRS Watch has sought out new information, including via a Freedom of Information Act request to DOE.

The contract for the production of the rods is between the DOE’s National Nuclear Security Administration (NNSA) and WesDyne International, a subsidiary of Westinghouse. NNSA, which is not a regulatory agency, is the nuclear weapons arm of DOE.

It is unclear what role Westinghouse itself plays in the TPBAR fabrication but another subsidiary, Westinghouse Government Services, could also be involved.

According to the South Carolina Secretary of State’s office, both WesDyne and Westinghouse Government Services are registered businesses in the state but neither had business licenses to operate in 2020 in Richland County, where the Westinghouse plant is located, and neither is listed as paying county business taxes in 2020.

Likewise, neither WesDyne nor Westinghouse Government Services, according to the South Carolina Department of Health and Environmental Control (DHEC) have environmental permits related to hazardous waste discharge. While it appears there are no aerial discharges from the tritium rod production, it appears that acetone rags, zirconium shavings and perhaps other waste are passed to the commercial side of operations. Such waste streams have been excluded from review in the current draft Environmental Impact Statement (EIS) prepared on the facility’s commercial license extension.

The comment period on the draft EIS is open until November 19 and the SRS Watch report will be submitted for the record, with a request that all the points in it be addressed in any final EIS, expected early in 2022. SRS Watch, which works against a new plutonium bomb factory at SRS, has requested that the comment period be left open until the NRC provides substantive information about the TPBAR activities and the management of the hazardous waste that it produces.

SRS Watch staffed tabled at James Taylor/Jackson Browne concerts on November 16 & 17 in South Carolina, with a focus on the proposed SRS Plutonium Bomb Plant (in the partially finished MOX building) and the lawsuit against it. See Nov. 9, 2021 eblast by the Guacamole Fund, which recognizes the work of SRS Watch: https://myemail.constantcontact.com/-10—On-the-road-with-Jackson-Browne-and-James-Taylor—Non-Profit-Tabling-.html?soid=1109113064272&aid=vqvm-3qhQhw