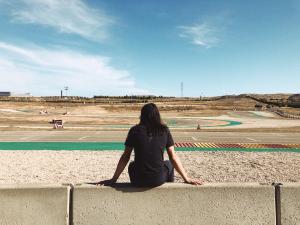 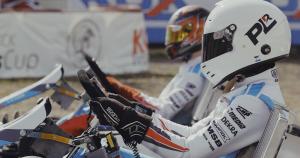 Ellis & Axel in the pits before a DEKM practice session 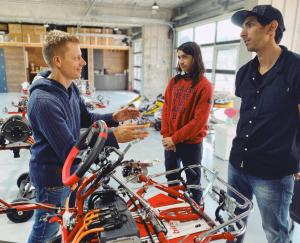 All-electric racing driver Ellis Spiezia brings two years of experience back to Aragon for another go. The 'electric renegade' is ready for redemption!

‘This is the heart of racing. To have these amazing friends who share your passion, but the moment the helmets go on, it’s all about competitiveness and who’s the absolute best.'”
— Ellis Spiezia

ALCANIZ, TERUEL, SPAIN, November 11, 2021 /EINPresswire.com/ — Nearly two years to the day later, electric racing driver Ellis Spiezia is being given the chance for retribution against a track, a rival friend, and himself. This weekend, the 12th to 14th of November, the Open Espana eKarting Championship by Play & Drive will be hosted once again at Motorland Aragon. After an exciting launch in October 2019 and a 2020 series cancelled due to Covid, Ellis has been waiting for this opportunity to get back on this track, in this kart, against one particular competitor.

‘Racing Aragon with Play & Drive in 2019 was my first real competitive kart race. We really had no idea what we were doing, and I was only 13 years old. My parents took a big chance to bring me there after I had won a regional indoor kart league in New York and then competed in the AEKC National Indoor Championship in Chicago. Those were big competitions to me, but nothing compared to hitting the throttle for the first time off the line in Aragon in one to one battles against these experienced racers.’

In 2019, Ellis and his mom, Michele, arrived from Hoboken, New Jersey, to Motorland Aragon knowing nothing except that they were determined to create the next step on Ellis’s electric racing journey. Conversations with Guillaume Meura, founder of Play & Drive, unfolded over email, and Ellis was invited to compete. The youngest in the field of 8 drivers which included an F4 pilot, a UK champion and a test driver for Rimac, Ellis was determined to take the leap. That UK Champion, Axel LaFlamme, was easily the toughest competition and also the first friend Ellis would find on track.

‘Honestly, part of it was that we both spoke English, and when you’re in a foreign country, that’s enough to make a friend. But Axel was awesome through the whole event. We did track walks together, talked about our favorite racers. Off the track I was making a friend. On track I was getting schooled by one of the best kart racers in Europe.’

Despite a shortened 2020 season, the boys competed together in the DEKM as the only two non-German drivers, where Axel took 3rd place overall and Ellis P10 out of 11 drivers. While they spent most of the races at opposite ends of the grid, in the paddock you could always find them hanging around together.

Now, after full season of 20 races across 9 countries in 7 months, Ellis has used 2021 as the opportunity to level up his skills. After thousands of laps, this season brought him multiple podiums in the Blue Shock Benelux series and the Vice Championship at the Euro Trophy in the Rotax Project E20. Proudly nicknamed the ‘Electric Renegade,’ Ellis’s improved performance on track has attracted attention, but not as much as being the world’s first all-electric racing driver. Without a doubt, he’s ready to face Axel again on track, at Aragon, with Play & Drive.

‘This is the heart of racing. To have these amazing friends who share your passion and can hang around playing games in the pits, but the moment the helmets go on, it’s all about competitiveness and who’s the absolute best. I think Axel and the whole grid is going to see a different driver than the one I was two years ago.’

After the podium ceremony in 2019, Axel and Ellis sat on the pit wall, imagining what the excitement of 10 electric karts taking off the line at Aragon would feel like. This weekend they’ll find out, and Ellis will have the opportunity to prove to himself and the world what two short years in electric karting can do.