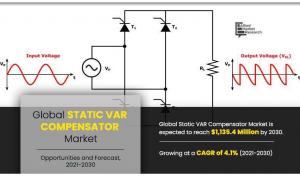 PORTLAND, OREGON, UNITED STATES, November 9, 2021 /EINPresswire.com/ — The global static VAR compensator market size was valued at $758.2 million in 2020, and is projected to reach $1,135.4 million by 2030, growing at a CAGR of 4.1% from 2021 to 2030. Static VAR compensator (SVC) is a static generator or absorber that is used to adjust the current output to exchange capacitive current. Adjustment of output helps to maintain and control parameters of electrical power system.

Increasing fuel prices and rising awareness of zero-emission transport systems have made the governments of India, Bangladesh, and others increase the emphasis on electrified track work. For instance, according to a report published by the Indian Ministry of Railways, the share of the electrified track has surged from 24% in 2000 to 40% in 2017 and over 65% by the end of 2020. This is anticipated to increase the sales of static VAR compensators for increasing the voltage profile of railway traction systems, thereby fueling the market growth. This factor is predicted to augment the growth of the global market.

The advanced digital control algorithm for the SVC system developed by General Electronics represents the latest design methodology by using a powerful model-based design approach. It is built by using a core library of complex control algorithms with automated code generation for all testing and verification stages. It also consists of a built-in event logger with automated time stamping of one millisecond resolution and can be remotely accessed via the internet using a secured protocol. This model-based advanced digital control algorithm for the SVC system has already revolutionized the approach for critical control software in power grids, aviation, renewable energy, and other sectors. Thus, the use of advance digital control SVC systems with automated control features is anticipated to open up new sales opportunities in the market.

By end use, the market is divided into electric utility, railways, industrial, and oil & gas. The electric utility segment dominated the global market in terms of revenue in 2020, with over two-third of the total share. Increasing power consumption has forced the electric utility companies to generate and transmit more electricity where static VAR compensators are widely used for providing fast-acting reactive power compensation on high voltage transmission networks, thereby fueling the market growth.

The novel coronavirus is an incomparable global pandemic that has spread to over 180 countries and caused huge losses of lives and the economy around the globe. The static VAR compensator market has been negatively impacted due to the wake of the COVID-19 pandemic, owing to its dependence on electric utility, railways, steel and metal, mining, heavy industrial, oil and gas, and other sectors. According to a report published by the National Bureau of Statistics of China, the large-scale manufacturing industry witnessed 20% decline in production in March 2020 as compared to March 2019 while profits declined by 66%. Several companies have either shut down or minimized their operations due to the risk of infections among the workforce where static VAR compensators are used for voltage stabilization purposes. This has temporarily hampered the growth of the static VAR compensator market amid the COVID-19 period.

In addition, the falling income of customers and travel restrictions imposed by both local and government bodies for running special trains on selected routes have led to a contraction of the demand for static VAR compensators among railways. According to a report published by Energy and Economic Growth Survey, the oil & gas sector is among the hardest hit sector with an average contraction of -2.8% in 2020. This has decreased the demand for static VAR compensator for voltage compensation applications in the oil and gas sector. Around 180 countries have temporarily stopped the trade of unnecessary products, which, in turn, has hampered the demand-supply chain of static VAR compensators amid the COVID-19 situation.

Get detailed COVID-19 impact analysis on the Market: https://www.alliedmarketresearch.com/request-for-customization/14003?reqfor=covid