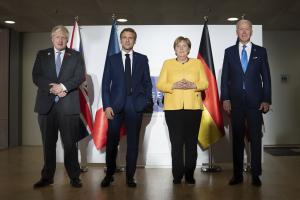 WASHINGTON, DC, UNITED STATES, November 5, 2021 /EINPresswire.com/ — In the wake of Iran’s massive drone strike on a US base in Syria, the recent naval confrontation between the US and Iran in the Gulf of Oman and despite the fact that China has signed a separate deal to import Iranian oil, essentially negating Western sanctions, the Biden administration is still planning to rejoin the Joint Comprehensive Plan of Action (JCPOA) and renew negotiations with Iran over its nuclear program. Iran is signaling its willingness to rejoin talks as are England, France, the European Union, and Russia. The American Mideast Coalition for Democracy urges the Biden administration to exercise caution and to be extremely skeptical of Iran’s ultimate intentions.

“Iran, most likely, will simply draw out the talks to buy time as it continues full steam ahead with its nuclear program,” said AMCD Co-Chair Tom Harb. “China has already circumvented the talks by throwing Iran a life-line with a 25-year multi-billion-dollar deal of its own; therefore, Iran has very little incentive to honestly negotiate. Furthermore, a nuclear deal with a sunset clause will give incentive to the Mullah’s regime to keep terrorizing the Middle East in Lebanon, Syria, Iraq, and Yemen and will put the Abraham Accords in jeopardy. Indeed, any deal which does not limit the Iranian Ballistic missile program and demand Iran divorce itself from its militias throughout the Middle East, will bring more death and destruction to the region. The Arab nations will compete for their own nuclear programs to protect themselves.”

“A crisis in leadership both domestically and internationally is what the Biden Administration is struggling with,“ added AMCD Co-Chair Hossein Khorram. “The current Gulf of Oman video showing Islamic Republic of Iran oil tanker seizure while Revolutionary Guards aimed guns at a U.S. Destroyer reveals US weakness. It appears the Biden Administration has inherited the same crisis of leadership that caused 444 days of U.S. embassy's seizure in 1979 from the Jimmy Carter Administration. Both Jimmy Carter and Joe Biden should know that the President of the United States is to lead this nation not just managing the government!”

President Ebrahim Raisi said on Thursday, a day after all sides announced the resumption of nuclear talks between Tehran and major powers on Nov 29, Iran will not back down "in any way" in defending its interests.

“It appears our enemies have sensed the White House's lack of resolve and are bullying the United States into submission,” said AMCD Co-Chair, John Hajjar. “The United States should not expect a favorable outcome from renewed nuclear negotiations while it has already basically surrendered to the Islamic Republic of Iran by begging them to return to the deal.”