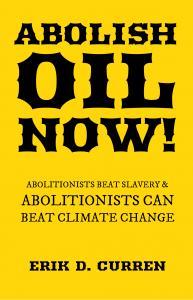 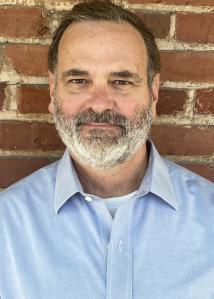 With time running out for serious action to stop climate pollution, citizens must demand that all artificial barriers to clean power be removed as soon as possible.”
— Erik Curren

CHARLOTTESVILLE, VIRGINIA, UNITED STATES, November 2, 2021 /EINPresswire.com/ — As world leaders start two weeks of meetings in Glasgow as part of the COP26 United Nations Climate Change Conference, a new book calls for citizens to demand that governments abolish the fossil fuel industry and phase out oil, gas and coal companies by 2030.

Entitled "Abolish Oil Now! Abolitionists Beat Slavery and Abolitionists Can Beat Climate Change," the book combines current affairs with history to offer a model for the climate movement to unblock climate action stalled for the last 30 years due to political opposition from fossil fuel companies. "Abolish Oil Now!" is the fourth book published by author Erik Curren, who has helped develop solar power projects at commercial scale for the last decade.

“Putting solar panels on schools, hospitals and businesses has given me practical evidence that clean energy is ready to go as a solution to climate change. It works in every way – of course it’s cleaner than fossil fuels. It’s also reliable and it saves money,” said Curren. “But restrictions and fees on renewables imposed by governments for no practical reason, put in place merely to protect fossil fuel companies from competition, have slowed down the spread of clean energy. With time running out for serious action to stop climate pollution, citizens must demand that all artificial barriers to clean power be removed as soon as possible.”

Since scientists first alerted world leaders to the danger of runaway climate disruption more than three decades ago, governments have failed to stop or even slow greenhouse gas pollution. Quite the opposite: this year, levels of carbon dioxide in the atmosphere reached the highest point since accurate measuring began 63 years ago, according to scientists at the Scripps Institution of Oceanography and the National Oceanic and Atmospheric Administration. “Fossil fuel burning is really at the heart of this. If we don’t tackle fossil fuel burning, the problem is not going to go away,” Scripps geochemist Ralph Keeling told the Washington Post.

That’s why Curren argues that saving the climate will require a more active approach to end fossil fuel pollution, inspired by the most successful citizens movement in history: the transatlantic campaign to abolish slavery in the 18th and 19th centuries.

“The problem is not scientific but political. If governments finally stop fossil fuel pollution, oil, gas, and coal companies stand to lose about the same amount of money that American slaveowners lost when the Civil War ended slavery in 1865,” said Curren. “Just as slaveowners fought to keep their property in humans, so fossil fuel companies have fought to save their profits, even if risked runaway climate disruption. And despite recent claims to be part of the solution, oil, gas and coal companies are still fighting against the Green New Deal and other major proposals to cut climate pollution.”

Curren urges climate advocates to seek help from the past, and so do leaders of the climate movement. MSNBC broadcaster Chris Hayes has written that abolition was the only movement in history big enough to serve as a model to overcome political opposition from the fossil fuel industry today. Al Gore and Naomi Klein have said that people who want to save the climate today should follow the abolitionists’ example. And naturalist David Attenborough has said that “climate change and ecological breakdown may one day be viewed with the same universal repugnance as slavery.”

A century and a half earlier, opposing one of the most powerful moneyed interests of the day—cotton, sugar and tobacco planters who relied on enslaved workers—Frederick Douglass urged his fellow abolitionists to keep fighting even in the face of determined opposition. “If there is no struggle, there is no progress….The struggle may be a moral one or it may be a physical one, or it may both moral and physical, but it must be a struggle. Power concedes nothing without a demand. It never has and it never will.”

Today, the same determination to face one of the world’s most powerful political lobbies, oil companies and their allies, will be needed to avert the catastrophe of runaway climate disruption. With inspiring stories of abolition heroes like Douglass, Harriet Tubman, Harriet Beecher Stowe, and William Lloyd Garrison, "Abolish Oil Now!" offers a proven model of political success with a special focus on race, pollution, and climate justice for Black Americans and other people of color.

Erik Curren has worked for a decade in the solar power industry while writing about energy, climate change and U.S. history. His previous books include "The Solar Patriot: A Citizen's Guide to Helping America Win Clean Energy Independence." His work aims to draw inspiration and lessons for success today from stories of people of all races in the past who fought with courage and conscience to solve the biggest problems facing America and the world.