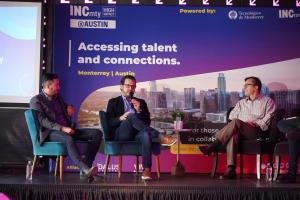 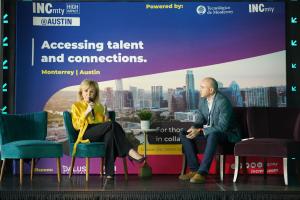 Blanca Treviño, President and CEO of Softtek and René Lankenau, Founder of Whitepaper. 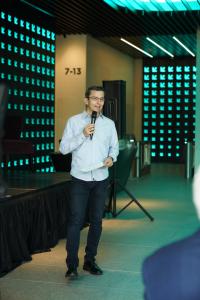 The entrepreneurial ecosystems of Austin and Mexico have more similarities than differences. This was the feeling at High Impact @Austin, of the INCmty platform

AUSTIN, TEXAS, EUA, October 23, 2021 /EINPresswire.com/ — The entrepreneurial ecosystems of Austin and Mexico have more similarities than differences. This was the feeling at High Impact @Austin, of the INCmty platform, in which entrepreneurs focused on topics of access to talent, markets, and capital, together with experts in US and Mexican markets.

During the first part of the program, Chris Schreck, the Acting Manager for Global Business Expansion in Austin, commented that the Texan city has grown exponentially, making it attractive for talent exchange between the two countries.

“Since 2001, Austin has added about 450,000 jobs. Why all this growth in Austin? Creativity, Commerce, Innovation & Affordability,” Chris Schreck said.

Blanca Treviño, President and CEO of Softtek, a Mexican company founded by the Tecnológico de Monterrey alumna, stated that she has witnessed the development of her country since the 1980s.

“Different countries are looking at Mexico owing to the talent of its people. It’s an attractive market, but we also have a lot to offer. Building bridges between universities, the government, and companies is indispensable in order to propel the sector,” Treviño stressed in her participation.

Josué Delgado, CEO and organizer of INCmty, affirmed that the aim of the entrepreneurial platform, backed by Tecnológico de Monterrey, is for “the growing number of startups in Austin to be aware of the benefits and advantages Mexico has to offer and help them access capital, talent, and market development, and the other way round from Monterrey. Austin is one of the ‘startup cities’ that is enjoying an impressive boom and this predicts a very important projection for the future of Latin America’s powerful startups.”

INCmty is a platform for entrepreneurs in Mexico and Latin America. The ninth edition of the festival will take place virtually from November 8 to 10, bringing together over 15 thousand entrepreneurs. For further information, visit: www.incmty.com/festival

About Tecnológico de Monterrey
Tecnológico de Monterrey (http://www.tec.mx) is a private nonprofit multi-campus university system founded in 1943, and distinguished globally for its academic excellence, educational innovation, entrepreneurship, and internationalization. With a presence across 29 cities in Mexico, the institution has more than 65 thousand enrolled undergraduate and graduate students, almost 7 thousand faculty members, and 27 thousand high school students served by 2,500 professors. The institution is accredited by the Commission on Colleges of the Southern Association of Colleges and Schools (SACSCOC) since 1950. According to the QS World University Rankings (2022), Tecnológico de Monterrey is ranked 161st globally; the QS Graduate Employability Rankings (2020) places the institution 1st in Mexico and 40th worldwide for employer reputation. The Times Higher Education Latin America University Rankings (2021) ranks the institution 1st in Mexico and 4th in Latin America, and is the only university outside the USA included in The Princeton Review & Entrepreneur magazine ranking of Top Schools for Entrepreneurship Studies (2021), placing 5th for undergraduate entrepreneurship programs. Tecnológico de Monterrey belongs to several prestigious global networks including, the Association of Pacific Rim Universities (APRU), Universitas 21 (U21), and The Worldwide Universities Networks (WUN).

About INCmty
INCmty is an entrepreneurship festival that takes place every year for 3 days. It works as a unique Tec de Monterrey platform for the impulse and promotion of innovative entrepreneurship; its purpose is to inspire, connect and empower entrepreneurs, investors, businessmen and corporations, activating an ecosystem to create and promote ideas and initiatives to become innovative and transformative companies. It has been held since 2013 and has had a consistent growth, with more than 81 thousand attendees in its 8 previous editions. It has counted with such relevant personalities as: Gary Vaynerchuk, Jeremy Gutsche, Mayim Bialik, Guy Kawasaki, Peter Diamandis, Jason Silva, Richard Branson, Kevin O'leary, Jenn Lim, Alexander Osterwaider, Daymond John and inspiring entrepreneurs such as Tanya Moss and Xavier López Ancona, among hundreds more. INCmty is the result of many alliances that, together, translate into content and support that allow great things to happen. Organizations such as: Google, Facebook, Silicon Valley Bank, Draper Network, IBM, Amazon, Ashoka, Hult Prize, Hootsuite, Global Entrepreneurship Network, WeXchange, International Accelerator, FEMSA, América Móvil, CCM Heineken, Santander, OCV Monterrey, Startup Bootcamp, Growth Institute, among many others, have been crucial in its development. More information at incmty.com

Creating bridges between entrepreneurial ecosystems in Mexico, LatAm and Texas is the objective of the High Impact @Austin to be held on October in this city.