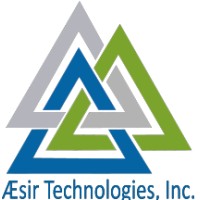 This level of hi-tech manufacturing AEsir is bringing will forever change the economic landscape of our region. The jobs created here will encourage continued growth and innovation.”
— Matt Brunner

Commenting on the selection of Rapid City, Governor Kristi Noem said, “I want to thank Æsir Technologies for selecting Rapid City as the location for its new gigafactory. To all the employees who are planning to make the move, we look forward to welcoming you to your new home.” In appreciation of the Governor’s support, Randy Moore, Æsir’s CEO, said, “The economic development package put forward by South Dakota was significantly superior to the other 20 locations being considered. Incentives offered by many other locations consisted of tax abatements of taxes that don’t exist in South Dakota. Here, the incentives provided true leverage to make our financial plan come together.” Phase 1 of the $250 million total projected investment was secured through a syndication with U.S. Finance and the local investment community. The State of South Dakota is providing debt support for the building and equipment with an additional commitment for up to $1 million in workforce development.

With proposed employment of up to 400 employees in the first phase of the project and expansion plans to quadruple capacity to 8 billion watt hours and 1,250 jobs., the economic impact this facility will have on South Dakota and surrounding states will be exponential. According to Matt Brunner, Economic Development Director of Elevate Rapid City, the move to western South Dakota will result in high end talent and diversified jobs in the region, making this is a huge win for the state. “This level of hi-tech manufacturing AEsir is bringing will forever change the economic landscape of our region. The jobs created here will encourage continued growth and innovation as complementary businesses come alongside their one-of-a-kind product. AEsir’s commitment to the region embodies what it means to elevate the region for all.” Said Brunner.

In contrast with lithium-ion manufacturing where the equipment and materials come from China and other parts of Asia, most of the equipment used in the manufacturing process will come from Wirtz Manufacturing out of Port Huron, Michigan. In an additional step aimed at securing its supply chain, Æsir recently announced its plan to directly source its nickel laterites from the Philippines and domestically convert it to nickel hydroxide, the main ingredient, for its cathode. The data center market has traditionally used lead-acid batteries, and lately, lithium ion has been garnering market share due to its longer life and reduced weight. However, recent fires such as the one at OVH in France, are slowing the adoption of lithium ion for the application. Bob Galyen, a member of Æsir’s technical advisory board and former CTO of CATL, said, “Of all the possible battery chemistries to be applied in a data center or 5G solution, nickel zinc is probably the best suited due to its energy density, safety attributes, and broad operating temperature range.”

Æsir has built a demand backlog of 1.5 million batteries from leading cabinet manufacturers, system integrators and distributors. Dave Mettler, Chief Revenue Officer of CPG, a leading provider of integrated data center solutions, said, “nickel zinc batteries offer several economic and technical advantages versus VRLA and lithium-ion solutions. Given the lengthy testing AEsir has undergone with US Navy and the positive experience our data center customer has had with system deployed nearly two years ago, it makes sense for them to build this plant to expand capacity.”

“We are excited about this phase of our company’s growth,” said Randy Moore, Æsir’s president & CEO said. “It is important to note that we will continue to serve our aerospace and defense customers out of our Joplin manufacturing plant which will also need expansion soon to serve growing demand in those sectors.” Æsir’s Joplin facility, and its employee base, are currently working with the Navy and Air Force to develop Nickel Zinc technology for Virginia Class Submarine and the Minuteman III ICBM, respectively. AEsir will continue to rely on Defense and Aerospace contracts to strengthen and grow the Joplin facility in order to address the growing demand for Nickel Zinc technology.