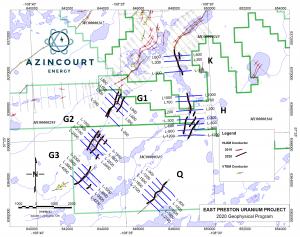 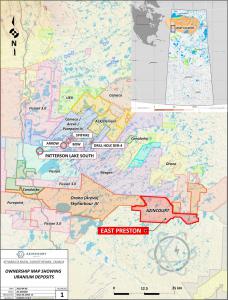 Up to 2500m of diamond drilling planned for the Athabasca project

VANCOUVER, BC, CANADA, January 21, 2021 /EINPresswire.com/ — AZINCOURT ENERGY CORP. (“Azincourt” or the “Company”) (TSX.V: AAZ, OTC: AZURF), is pleased to provide an update on preparations for the 2021 winter exploration program at the East Preston uranium project, located in the western Athabasca Basin, Saskatchewan, Canada.

Results from the 2020 HLEM survey have been received and drill target prioritization is now underway, based on the compilation of results from the 2019 and 2020 drill programs and 2018 through 2020 ground based EM and gravity surveys, and property wide VTEM and magnetic surveys.

An exploration program of approximately $1M to $1.4M will focus on the central portion of the East Preston property. Permits are in place to allow the commencement of an approximately 2000-2500 meter drill program consisting of up to 10 to 12 holes testing targets extending south from the A Zone into the G1, G2 and G3 target areas. Drilling in the A zone suggests this structural corridor hosts significant graphitic packages within strongly sheared and faulted host lithologies, indicating an environment conducive to fluid movement and uranium deposition.

“We’re pleased to get the 2021 drill program underway,” said president and CEO, Alex Klenman. “East Preston has had only 12 holes drilled to date, and these early results confirm we have the right basement unconformity uranium setting with the right rocks, structure and alteration. We’re still very early in the exploration phase, and with the recent geophysics program adding even more drill targets, we believe strongly we’re on the path to discovery. With the uranium space beginning to turn to the upside, the timing for drilling is excellent,” commented Mr. Klenman.

Crews are currently preparing roads into the proposed drilling areas. Drill pad locations are now being firmed up and will be announced closer to the drill commencement date, which is expected to be mid-February. TerraLogic Exploration and Bryson Drilling have both once again been contracted to execute the drill program, which is being conducted under the guidance and supervision of Azincourt’s Exploration Manager, Trevor Perkins, P.Geo, and Jarrod Brown, M.Sc., P.Geo, Chief Geologist and Project Manager with TerraLogic Exploration.

The East Preston Project has multiple long linear conductors with flexural changes in orientation and offset breaks in the vicinity of interpreted fault lineaments – classic targets for basement-hosted unconformity uranium deposits. These are not just simple basement conductors; they are clearly upgraded/enhanced prospectivity targets because of the structural complexity.

The targets are basement-hosted unconformity related uranium deposits similar to NexGen’s Arrow deposit and Cameco’s Eagle Point mine. East Preston is near the southern edge of the western Athabasca Basin, where targets are in a near surface environment without Athabasca sandstone cover – therefore they are relatively shallow targets but can have great depth extent when discovered. The project ground is located along a parallel conductive trend between the PLS-Arrow trend and Cameco’s Centennial deposit (Virgin River-Dufferin Lake trend).

Azincourt Energy is a Canadian-based resource company specializing in the strategic acquisition, exploration, and development of alternative energy/fuel projects, including uranium, lithium, and other critical clean energy elements. The Company is currently active at its joint venture East Preston uranium project in the Athabasca Basin, Saskatchewan, Canada, and the Escalera Group uranium-lithium project located on the Picotani Plateau in southeastern Peru.

ON BEHALF OF THE BOARD OF AZINCOURT ENERGY CORP.

Neither the TSX Venture Exchange nor its regulation services provider (as that term is defined in the policies of the TSX Venture Exchange) accepts responsibility for the adequacy or accuracy of this release.
This press release includes “forward-looking statements”, including forecasts, estimates, expectations and objectives for future operations that are subject to a number of assumptions, risks and uncertainties, many of which are beyond the control of Azincourt. Investors are cautioned that any such statements are not guarantees of future performance and that actual results or developments may differ materially from those projected in the forward-looking statements. Such forward-looking information represents management’s best judgment based on information currently available. No forward-looking statement can be guaranteed, and actual future results may vary materially.