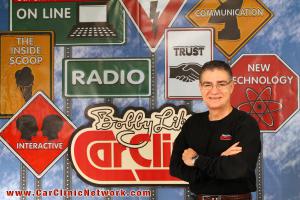 What a thrill ride this has been, and I’m looking forward to more here-we-go-again adventures in engaging and interacting with people who love cars, trucks and automotive technology.”
— Bobby Likis

PENSACOLA, FL, UNITED STATES, September 14, 2020 /EINPresswire.com/ — Bobby Likis – host of nationally syndicated, award-winning, car-talk radio program, “Bobby Likis Car Clinic” – announces retirement from his radio network after 29 successful years. The grand finale will air on Saturday, October 10, 2020, from 10a-12n ET, on affiliates nationwide and on www.CarClinicNetwork.com/LiveVideo, www.YouTube.com/BobbyLikis and www.Facebook.com/BobbyLikis worldwide. You are cordially invited to tune in on your local radio station or from anywhere via the above links or, better yet, call in at 888-Car-Clinic.

Reflects Terry Sabiston, Director of Motorsports at WNDB, “Bobby Likis has been a partner with the WNDB family for 29 years. He has the ability to translate into layman's terms today's complex automobiles; he draws you in and inspires you to learn more about how your car works.” He adds, “I enjoy sharing my perspective of racing at Daytona International Speedway on the air with Bobby and experience the passion he exhibits every week. Bobby Likis will be missed in Daytona Beach and across the nation.”

A pioneer in cutting-edge distribution channels, Likis “podcasted before podcasting was cool” and has streamed live videocasts on CarClinicNetwork.com and on his YouTube channel since 1996. Those live videocasts are also recorded and distributed through The Auto Channel’s associated television network.
Say Bob Gordon and Marc Rauch, Co-Founders/Co-Publishers of The Auto Channel, “Over the years there have been some great automotive gurus broadcasting national radio and TV shows. The best, the very best, is Bobby Likis. Combining a wonderful, warm personality, smooth delivery style, and encyclopedic knowledge, Bobby has graced the airwaves and helped untold thousands of consumers and motoring enthusiasts.” They expand, “For a quarter of a century, The Auto Channel has been lucky to count Bobby as a valued friend and business associate. We will miss the Bobby Likis Car Clinic weekly show terribly; Saturday mornings will never be the same again. Thanks Bobby for your terrific information, earnest insight, and reasoned counsel.”

Also in 1996 to more effectively support his stations and deliver enhanced content to his listeners, Likis designed and built an all-digital, state-of-the-art studio and located it within his then-owned automotive service and repair shop. Built on his extensive repertoire of hands-on experience, Likis has answered more than 100,000 car questions live, on-air and unprompted. Additionally, Likis created a daily :60 vignette, “Car Clinic Minute,” a gold nugget of automotive trivia, trends and tips, appealing to car owners, trivia lovers, new- and used-car buyers, teenagers and anyone who loves cars or has a dream of owning one.

“Automotive Info-Tainment” was originally coined by Likis to reflect the essence of “Bobby Likis Car Clinic” programming. Says Likis, “I love educating folks about how to care for, preserve and ‘fun-ify’ their second largest investment: their vehicles.”

Honored on the coveted “Talker’s 250” (spotlighting the radio industry’s top broadcast personalities) for an unprecedented five years in a row in his category, Likis has also been featured in dozens of automotive and broadcast technology publications.

Reflects Likis, “What a thrill ride this has been, and I’m looking forward to more here-we-go-again adventures in engaging and interacting with people who love cars, trucks and automotive technology.” In typical style – after a toe-dip into retirement – Likis plans to explore expansion of his on-line programming and podcasts which currently include Spreaker, iHeart Radio, Spotify, Google, Stitcher, Cast Box, Deezer, Podcast Addict and Podchaser. Stay tuned!