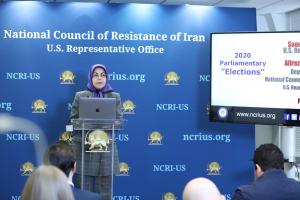 NCRI Rep. in the United States, Soona Samsami speaking before the press ahead of Iran parliamentary elections. 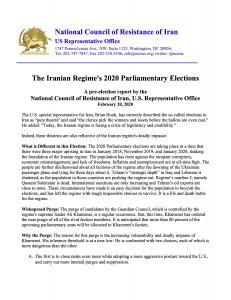 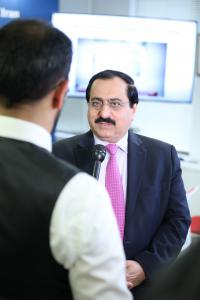 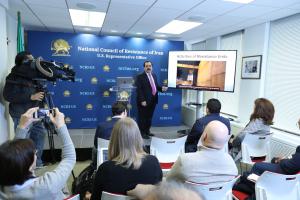 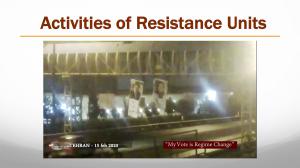 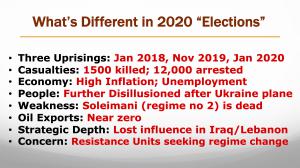 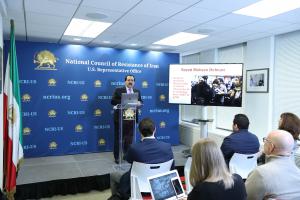 Alireza Jafarzadeh describing the repressive candidates during the NCRI-US press briefing ahead of the elections.

Reporters and TV cameras at NCRI-US office where a 13-page report was released ahead of the parliamentary elections in Iran.

Very low voter turnout are expected after 1,500 protesters were killed and thousands were jailed in November

The 2020 Parliamentary elections are taking place after three major uprisings in Iran in January 2018, November 2019, and January 2020, which shook the regime to its foundations.”
— Soona Samsami

WASHINGTON, DC, U.S., February 21, 2020 /EINPresswire.com/ — The U.S. Representative Office of the National Council of Resistance of Iran (NCRI-US) held a press briefing in its Washington office on the Iranian regime’s upcoming parliamentary elections.

Soona Samsami, the U.S. representative of the NCRI, told reporters that the elections this year are very different than previous elections. “The 2020 Parliamentary elections are taking place after three major uprisings in Iran in January 2018, November 2019, and January 2020, which shook the regime to its foundations,” Samsami said. “The population has risen against the rampant corruption, economic mismanagement, and lack of freedoms.”

Samsami said that the purge by the Guardian Council reflected the “increasing vulnerability and deadly impasse of Khamenei. His tolerance threshold is at a new low. He is confronted with two choices, each of which is more dangerous than the other.” The NCRI representative listed Khamenei choices as:

To close ranks even more while adopting a more aggressive posture toward the U.S., and carry out more internal purges and suppression.

To lessen the conflict with the U.S. and accept some of the 12 points announced by Secretary Mike Pompeo, which would involve showing flexibility and tolerance at home.

“Based on the regime's internal deliberations, Khamenei has decided to close ranks and carry out a complete purge during the elections,” Samsami said.

1) Fear of uprisings – The regime is afraid that any split within the ruling elite would fuel more uprisings which, in turn, would deepen internal schisms, shearing off individuals who are not completely subservient and loyal to the regime.

2) Fear of the opposition – The regime is alarmed that the opposition, and particularly the National Council of Resistance of Iran (NCRI) and the Mujahedin-e Khalq (MEK), would exploit its internal schisms in the era of popular uprisings, thus facilitating its overthrow.

3) Fear of the U.S. – The regime is worried that any schism would aggravate its vulnerability in its stand-off with the U.S.

Jafarzadeh commended U.S. special representative for Iran Brian Hook for the new sanctions imposed by the U.S. Government on the Guardian Council members, including Ahmad Jannati and Mohammad Yazdi. Hook described the election sham as “an event euphemistically called elections” for the Iranian legislature.

Jafarzadeh said that such increased sanctions by the United States, “send a strong signal to the Iranian people that their repressive rulers’ suppression is not condoned by the international community as the Iranian people and their organized Resistance continue their uprising for regime change by Iranians.”

Jafarzadeh said, “Many candidates who have a good chance of getting into the parliament have spent years in the Iranian regime’s IRGC, the Qods Force, the Bassij, and the MOIS.” This by itself further puts the regime and its parliament at odds with the Iranian people, who have already decided to boycott the elections, and are chanting “My vote is regime change.”

“The Iranian people’s legitimate demands were met with bullets and machine guns. 1,500 were killed and over 12,000 arrested. They have no desire to participate in an election, which only has one purpose: to keep those responsible for these crimes in power,” Jafarzadeh said.

Samsami said it is important to note that despite Tehran’s propaganda, “the voter turnout, anticipated to be radically lower than previous rounds, has caused a crisis.” The NCRI representative in the U.S. said, three factors will be contributing to low voter turnout:

1) The explosive state of society and extensive disenchantment, as well as the November uprising, which led to the massacre of at least 1,500 demonstrators.

2) Rouhani's lies and absolute loyalty to Khamenei, turning his back on those who voted for him.

3) The expansion of Resistance networks inside Iran and their active calls for a boycott.”

Jafarzadeh said that Tehran for years has been “election engineering to both ensure that loyalists end up in the Majlis and to significantly inflate the numbers on voter turnout 4 to 5 fold, at the minimum.”

Samsami said that these elections “will have severe short-term and medium-term consequences for the regime, leaving it increasingly broken, more vulnerable, with a weaker social base and faced with the potential of greater protests and social uprisings.”

During the press briefing the NCRI released a 13-page pre-elections report which elaborated on the election boycott activities of the Resistance Units of the main Iranian opposition movement, the Mujahedin-e Khalq (MEK), all across Iran.

A poster hung on February 16, in the city of Saveh in the Central Province had Maryam Rajavi’s picture above the quotation, "Boycotting the sham elections is a national duty and our commitment to the martyrs of the uprising.”

The NCRI-US report elaborated on the preventative security precautions, taken by the regime, as follows:

— The IRGC and the Bassij paramilitary forces are tasked with protecting and providing security for the elections and operate in coordination with the Intelligence Ministry (MOIS);

— The IRGC, the Bassij, and the State Security Forces (SSF) have been placed on high alert since February 15. All furloughs have been cancelled;

— The anti-riot forces are on high alert and tasked with preventing any protests or revolts;
SSF vehicles patrol the streets with their sirens in order to create an atmosphere of fear and trepidation among the public;

— Police stations have been ordered to arrest anyone suspicious, including people on bikes without plates or anyone not carrying an ID card, starting daily from 23:30 at night to 05:00 in the morning;

— All soldiers in all garrisons and military locations have been ordered to bring in their birth certificates in order to cast votes.

Jafarzadeh concluded by specifying what steps the United States may and should take:

— Regardless of what lies Tehran announces following the election sham, the Iranian regime’s actions, not promises, must be the sole gauge to determine how to deal with it.

— Experience has shown that the ruling clerics only understand the language of firmness and strength. Thus, more sanctions should be imposed on the regime and calls for accountability for the murderers of the uprising must be a priority.

— It is time for the United States to recognize the right of the Iranian people to change their repressive regime, and to acknowledge that their time has come to establish a republic based on the free vote, on the separation of religion and state, and on pluralism, justice and equality.

Why Iran elections under the ruling theocracy is a sham