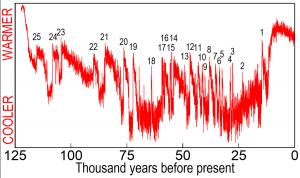 Twenty-five sudden warmings observed in ice cores from the summit of Greenland. 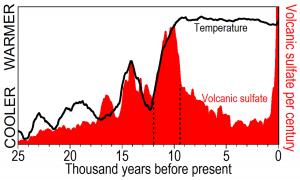 The greatest volcanism (red) was contemporaneous with the greatest temperature (black) at the end of the last ice age. 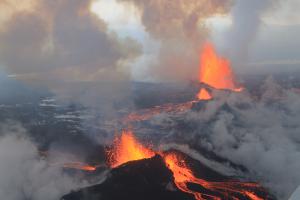 The Bárðarbunga basaltic eruption in 2014-15 covered 33 square miles of land in central Iceland.

Dr. Peter L. Ward describes at a major international meeting how Earth’s climate has been changing rapidly every few thousand years in a highly erratic way

Sudden, erratic warming is explained most directly by chlorine and bromine gases from major basaltic lava flows depleting the ozone layer. The larger the flow, the greater the depletion and warming.”
— Dr. Peter L. Ward

JACKSON, WYOMING, USA, December 4, 2019 /EINPresswire.com/ — Between 1988 and 2003, teams of scientists drilled three, two-mile-deep, holes below the summit of the Greenland ice sheet. They estimated air temperatures over the past 120,000 years by measuring different isotopes of oxygen in air bubbles trapped as the ice formed.

All three data sets clearly document twenty-five times, between 115,000 and 15,000 years before present, when air temperatures increased abruptly ten to as much as thirty degrees Fahrenheit within a few decades. For comparison, average annual temperatures in Greenland have increased by less than four degrees during the past fifty years.

Dr. Peter L. Ward, a geophysicist and 27-year veteran of the US Geological Survey explains that “the existence and sudden nature of these so-called Dansgaard–Oeschger events has been discussed extensively in the literature since 1986. Scientists agree that these twenty-five sudden warmings occurred. They disagree, however, on what caused them.”

Ward is describing these events in a presentation at the annual meeting of the American Geophysical Union on December 10, 2019, in San Francisco in a special session on fast and slow changes in the climate system. The abstract of his presentation is found here.

“These sudden warmings are observed in ocean cores in the North Atlantic as a sudden decrease in ocean salinity,” Ward explains, “suggesting sudden influxes of fresh meltwater. Many scientists working on the problem have been unable to explain the source of the meltwater or why ocean currents would change so abruptly.”

In 2006, Ward discovered that the greatest evidence of major volcanism in Greenland ice was from 12,000 to 9,500 years before present, precisely the time when oceans were warmed out of the last ice age. He found that this was also the time of major basaltic volcanism in Iceland and in the Snake River Plain of southern Idaho. Near the end of the last ice age, Iceland was covered by nearly a mile of ice. Extensive basaltic eruptions under ice would lead quickly to large volumes of fresh meltwater.

During the past 13 years, Dr. Ward has studied basaltic lava flows from around the world. “What is fascinating,” he explains, “is that pretty much anywhere you can date a basaltic lava flow covering tens of square miles all the way up to millions of square miles of land, you find evidence for sudden warming—the larger the flow, the greater the warming and the longer the warming appears to last.”

One of the largest basaltic lava flows in the world formed around 251 million years ago in Siberia. It covered an area of more than three million square miles, equivalent to the lower 48 United States less Montana and Texas. Imagine lava flows all the way from New York City to San Francisco. The oceans became hot-tub temperatures and highly acidic. This was the time of the greatest mass extinction known in Earth history. More than 96% of all marine species and 70% of all terrestrial invertebrate species went extinct. Many mutations of plant species have been discovered from this time.

“The 25 sudden warmings documented in Greenland,” according to Ward, “appear to be small recent examples of a process that has been going on throughout Earth history. Basalt is a very hot, primitive magma that contains ten times more chlorine and bromine than more explosive magmas.”

Ward explains that one atom of chlorine in the lower stratosphere has been observed to destroy up to 100,000 molecules of ozone. The ozone layer protects life on Earth by absorbing ultraviolet-B solar radiation that burns your skin and causes skin cancer, cataracts, and mutations. When there is less ozone to absorb this very hot radiation, more of it reaches Earth, warming Earth.

These sudden, erratic warmings within decades are typically followed by slow, incremental cooling over millennia. “All major explosive volcanic eruptions,” Ward explains, “are observed to eject megatons of water and sulfur dioxide into the lower stratosphere where they form an aerosol or mist that spreads around the world within months, reflecting and scattering sunlight, causing global cooling of approximately 0.9 degrees for two to four years, depending on the size of these eruptions. Modelling shows that several major explosive eruptions per century, over millennia can cause the slow incremental cooling observed.”

Ward emphasizes that these sequences of sudden warming followed by slow cooling are not cyclic—they are highly erratic in onset, intensity, and duration. This is explained most directly by observed basaltic volcanism. Ward says that he cannot imagine how concentrations of greenhouse gases such as carbon dioxide, could be doubled or tripled within a few decades to explain these warmings. While volcanoes emit megatons of carbon dioxide, atmospheric concentrations are observed to decrease during the few years following the eruptions when the aerosols are cooling the ocean surfaces.

“The ice cores,” Ward explains, “provide the most precise evidence with the best time resolution for the footprints of climate change, but we find evidence throughout the geologic record of similar erratic sequences of climate change that average three to five thousand years in length. Climate is changing far more rapidly and far more often than most people have been imagining.”

Extensive information is available at WhyClimateChanges.com.

Dr. Peter Langdon Ward earned a BA at Dartmouth College and a PhD at Columbia University in geophysics. He worked 27 years at the United States Geological Survey, leading a group of more than 140 scientists and staff and playing a lead role in establishing and initially leading a major national research program. Ward has worked full time in retirement, at his own expense, since 2006, carefully reexamining all the evidence and theories for why climate has changed throughout Earth history.

The American Geophysical Union has a membership of more than 62,000 earth and space scientists from 114 countries. Typically, 25,000 members attend the annual meeting each December, which this year is December 9 to 13 at the Moscone Center in San Francisco, California.