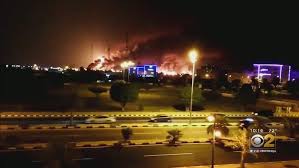 HONG KONG, September 17, 2019 /EINPresswire.com/ — Oil fell more than 1% on Tuesday as the market hung on tenterhooks following attacks on Saudi Arabian crude facilities that cut the kingdom's production in half and sent prices soaring by the most in decades.

The attack heightened uncertainty in a market that had become relatively subdued in recent months due to slowing growth as the U.S.-China trade war rages and now faces the loss of crude from Saudi Arabia, usually the supplier of last resort.

A gauge of oil-market volatility on Monday rose to the highest level since December of last year, and trading activity showed investors expect higher prices in coming months.

Crude prices surged by nearly 20% on Monday as they responded to Saturday's attack, the biggest jump in almost 30 years, before closing around 15% higher.

"With the US 'locked and loaded' awaiting signs from Saudi Arabia that Iran was involved, tensions in the Middle East could get worse before they get better. Under these circumstances the price of oil could remain elevated for some time yet," Elite Capital analyst James Heatherington said.

Saudi Arabia is the world's biggest oil exporter and, with its comparatively large spare capacity, has been the supplier of last resort for decades.

The attack on state-owned producer Saudi Aramco's crude-processing facilities at Abqaiq and Khurais cut output by 5.7 million barrels a day and threw into question its ability to maintain oil exports.

The company has not given a specific timeline for the resumption of full output.

Initially there were concerns that the attack may cause delays to the pending IPO of Saudi Aramco. Sources close to the matter confirmed that although the situation was cause for concern. It would not interrupt preparations for the IPO roadshow.