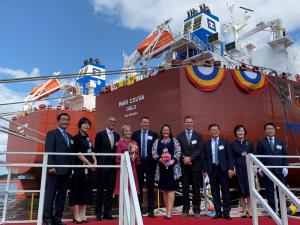 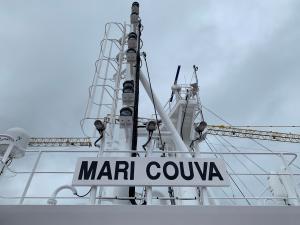 The investment in these vessels is a perfect example of companies looking to explore innovative ways to meet global emission requirements for the marine sector”
— Chris Chatterton, Methanol Institute COO

The 49,000dwt product tankers Mari Couva and Mari Kokako were named at the Hyundai Mipo Dockyard by owners Marinvest and Waterfront Shipping on August 16. A further two vessels will join the Waterfront fleet before the end of the year, owned by NYK and Mitsui/IINO Kaisha and chartered to Waterfront Shipping.

The new tonnage will join the seven existing dual-fuel tankers operated by Waterfront Shipping which have recently marked 50,000 hours of trouble-free operations on Methanol as fuel.

“The launch of the Mari Couva and Mari Kokako is a milestone for the acceptance of Methanol as a safe and reliable marine fuel that can meet IMO2020 regulations and create a pathway to lower carbon shipping,” said Greg Dolan, CEO, The Methanol Institute. “The fact that the new ships feature more efficient engines capable of achieving IMO NOx Tier III compliance with no further modification demonstrates that this is a technology that is moving forward consistently.”

The use of Methanol as fuel requires very little additional investment into the ship since the fuel is a liquid and has handling properties similar to those for conventional distillate fuels. This makes it suitable for both newbuildings and retrofit projects, with minimal impact on cargo space and a simple training process for crew.

Interest in the use of Methanol as marine fuel has continued to grow in recent years, with numerous research projects completed or in progress to investigate the suitability of marine fuel across multiple vessel types.

“The investment in these vessels is a perfect example of companies looking to explore innovative ways to meet global emission requirements for the marine sector, something which continues in vessel demonstration programs in Europe, China and Singapore,” adds Chris Chatterton, Chief Operating officer of the Methanol Institute. “We expect the implementation of the IMO2020 regulations to further increase interest in Methanol as a marine fuel that can deliver cost-effective compliance.”

Key Facts about Methanol as Marine Fuel
• Methanol is a safe, clean and efficient marine fuel, able to help shipowners meet IMO2020 SOx and PM and NOx
Tier III regulations.
• Methanol is cost competitive with other IMO2020 compliant fuels in energy equivalent terms.
• As one of the world’s most widely traded commodities, the shipping and chemical industries have a long history
and ample experience in safely handling Methanol.
• Methanol as fuel removes the need for expensive cryogenic equipment ashore or on the ship and is much less
expensive in terms of newbuilding and conversion costs.
• Methanol has very low combustion-based CO2 emissions. Increasing volumes of renewable Methanol used as marine
fuel create a pathway to compliance with IMO2030 and even 2050 carbon emission regulations.

About the Methanol Institute
First formed in 1989, the Methanol Institute (MI) serves as the trade association for the global methanol industry. MI represents the world’s leading methanol producers, distributors and technology companies from offices around the world. MI provides value to its members by ensuring safe handling of methanol and its derivatives, promoting methanol growth by furthering methanol as an essential chemical commodity and an emerging source of clean and renewable energy, influencing global regulatory and public policy initiatives that impact the methanol industry.