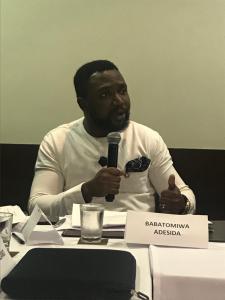 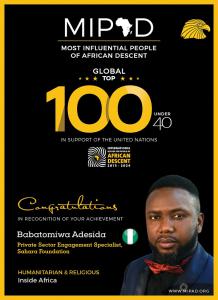 Sahara Foundation’s Private Sector Engagement Specialist, Babatomiwa Adesida selected as one of the 2019 Most Influential People of African Descent (MIPAD)

I am extremely passionate about Social Reconstruction, particularly in developing nations and nothing gives me more joy than the success Sahara Foundation has achieved”
— Babatomiwa Adesida, Private Sector Engagement Specialist, Sahara Group

LAGOS, NIGERIA, August 19, 2019 /EINPresswire.com/ —
Sahara Foundation’s Private Sector Engagement Specialist, Babatomiwa Adesida has been selected as one of the 2019 Most Influential People of African Descent (MIPAD) in recognition of his contribution to humanitarian work and promotion of the Sustainability Development Goals (SDGs).

Sahara Foundation is the social responsibility vehicle of Sahara Group, a leading energy and infrastructure conglomerate with operations in over 38 countries across Africa, Asia, Europe and the Middle East.

“I am very flattered by this award and humbled by the opportunity Sahara Foundation has given me to serve humanity. I am extremely passionate about Social Reconstruction, particularly in developing nations and nothing gives me more joy than the success Sahara Foundation has achieved in terms of transforming the lives of over 2,000,000 beneficiaries across our locations. I dedicate this recognition to Sahara Foundation as well as all our partners and stakeholders across the globe,” Adesida stated.

MIPAD publishes a unique global 100 list that identifies outstanding individuals of African descent worldwide, pairing those based in the Diaspora with their counterparts inside Africa across four categories: Politics & Governance, Business & Entrepreneurship, Media & Culture, and Humanitarian & Religious.

Adesida will be celebrated alongside other honorees during MIPAD Class of 2019 recognition week in New York from September 27th – October 3rd 2019 on the sidelines of the 74th United Nations Annual General Assembly, according to Kamil Olufowobi, MIPAD’s Founder and CEO.

Babatomiwa Adesida drives partnerships between Sahara Group and international organisations such as the United Nations Development Program (UNDP) in New York and the Organization for Economic Cooperation and Development (OECD) in Paris. Sahara Group and the UNDP recently signed an MoU on promoting sustainable energy in Africa. Adesida will play a critical role in the implementation of the project which seeks to enhance access to clean and affordable energy through collaborative interventions in selected countries for effective realisation of the SDGs.

Adesida has over 12 years of Private Sector experience and has been involved in the development, implementation and monitoring of projects and policies through the private sector in partnership with numerous governments in different countries including Nigeria, Ghana, Cote d’Ivoire, Tanzania, Zambia, Switzerland, Singapore and U.A.E.

Adesida received a B.Sc with honours in Sociology from the University of Ibadan in Nigeria and MSc. in Public Policy from the University of Bristol, U.K where he won a partial scholarship for international students. He has been nominated for and also received several CSR awards some of which include the Future Awards Nigeria, the Nigeria CSR awards and the 100 most impactful CSR leaders (Global listing) in India.