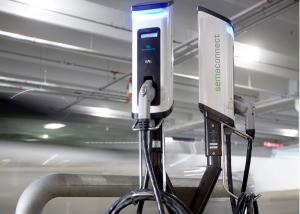 Access to a network is what makes smart EV charging truly powerful. We fought on behalf of the entire industry’s ability to innovate and provide smart features that benefit the drivers.”
— Mahi Reddy, CEO at SemaConnect

WASHINGTON, DC, USA, April 17, 2019 /EINPresswire.com/ — The US Court of Appeals for the Federal Circuit has upheld and affirmed the US District Court’s motion to dismiss ChargePoint’s patent infringement lawsuit against SemaConnect. The original lawsuit, filed in December 2017 and dismissed in March 2018, claimed invention of networked electric vehicle charging. ChargePoint claimed that SemaConnect had violated four patents regarding the use of a network to control the flow of electricity from the power grid to an electric vehicle. The Federal Court’s decision is a win for SemaConnect and the entire EV charging industry’s right to build charging networks.

The eight patent claims found in ChargePoint’s four patents broadly described the concept of sending a communication over a network in order to turn electricity on and off. In a 28-page opinion, Chief Judge Prost affirmed the lower court’s ruling that the eight claims were abstract ideas rather than patentable technical improvements. Further, the broad language in the patents would prevent the rest of the electric vehicle charging industry from using network services.

“The claims do nothing to improve how charging stations function; instead, the claims merely add generic networking capabilities to those charging stations and say ‘apply it,’” wrote Chief Judge Prost. “This is simply an abstract-idea-based solution implemented with generic technical components in a conventional way.”

“Access to a network is what makes smart EV charging truly powerful. We fought on behalf of the entire industry’s ability to innovate and provide smart features that benefit the drivers. Now that the Court has sided with us twice, we look forward to driving the future forward through smart networked charging solutions,” said Mahi Reddy, CEO at SemaConnect.

“This isn’t just a victory for SemaConnect, but for the whole industry,” said Philip Jones, executive director at the Alliance for Transportation Electrification. “Open networks both create the ability for EV owners and station operators to move seamlessly among service providers, and assist with smart charging that creates value for all.”

“Innovation is fueled by inventiveness that is optimized under a collaborative development model such as is provided by open source and open standards. The US Court of Appeals for the Federal Circuit's recent decision reaffirms the fundamental notion that poor quality patents should never be permitted to slow or stall innovation and thereby enables collaborative advances in electric vehicle charging critical to the growth of the electric vehicle industry,” said Keith Bergelt, CEO at the Open Invention Network.

About SemaConnect:
SemaConnect is the leading provider of electric vehicle amenities to the North American commercial and residential property markets. A complete EV support partner, SemaConnect delivers a truly modern property experience through innovative, elegantly designed charging stations and a robust and open network. The company has helped maximize property value and appeal through thousands of successful Class A deployments since its founding in 2008, for companies such as CBRE, JLL, Hines, Greystar, Cisco Systems and Standard Parking. SemaConnect remains the preferred charging solutions partner of municipal, parking, multifamily, hotel, office and retail customers across the United States and Canada. For more information, visit https://www.semaconnect.com/.